Cost of Living Adjustments (COLA), is a commonly used term for military and veterans benefits....

Cost of Living Adjustments (COLA), is a commonly used term for military and veterans benefits. But the term can be somewhat confusing because it can be used in different contexts. The most common uses for the term include COLA adjustments for Social Security, retirement pay and veterans’ benefits. These may include Department of Veterans Affairs disability compensation, annual military-base-pay cost-of-living increases, and location-based cost-of-living increases.

Let’s look at these separately. 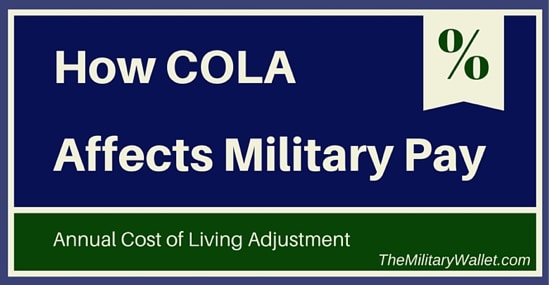 This COLA is given to offset the impact of inflation on the purchasing power of the affected benefits. It is based on the percentage increase in the Consumer Price Index for Urban Wage Earners and Clerical Workers.

While the COLA used for Social Security Benefits is guaranteed by law, COLA increases for veterans’ benefits such as disability compensation, clothing allowances and dependency and indemnity compensation must be presented as a bill and voted on by Congress each year.

How is COLA Calculated?

This is a good thing, because the CPI-W showed a negative inflation rate, resulting in no COLA increase in 2016. So military and veteran compensation for certain benefits will remain flat instead of increasing as they do in most years.

How Much is the Annual Military Retirement Pay COLA Raise?

It varies. Here are the last 10+ years of military retirement COLA pay raises:

As you can see from this table, there have been three years in the last decade (2010, 2011 and 2016) in which there was no COLA increase. The last decade witnessed a low-inflationary period.

Which Payments Does SSA COLA Cover?

You can read more about SSA COLA here and on this page.

Military members receive a pay increase in most years. This is often referred to as a military pay raise or annual Cost of Living Adjustment. Unlike the example in the previous section, there is no automatic pay raise. And while Congress takes certain measurements into consideration when declaring pay raises, they are not tied to the CPI-W or any other specific measurement.

Instead, Congress votes pay raises into effect each year. Pay raises can vary based on the annual inflation rate, civilian compensation comparisons and other financial factors.

In most cases, military pay raises are applied uniformly to all pay grades. However, there have even been times when Congress passed pay raises that targeted individuals in select pay grades. These instances happen when there is a larger perceived pay gap in the civilian sector.

Here are the past 10 military pay raises:

The final type of COLA is location-based. This is a supplemental benefit added to military pay. Location-based COLA is given to offset a higher cost of living based on where the service member lives.

This can be commonly found in Outside the Continental U.S. (OCONUS) locations depending on living expenses, the exchange rate and other factors. Location-based COLA can also be found in certain Continental U.S. locations. COLA can vary on a monthly basis in both CONUS and OCONUS locations.

Outside the Continental U.S. Cost of Living Adjustments

This is a non-taxable supplemental income. The service member’s rank of employment, years of service and number of dependents also determine the COLA payment. Here is an Overseas COLA FAQ.

According to the Defense Travel Management Office, COLA “is a taxable supplemental allowance designed to help offset higher prices in the highest-cost locations in CONUS that exceed the costs in an average CONUS location by 8 percent or more. The program affects approximately 54,000 service members in 21 Military Housing Areas and 21 other counties in CONUS.”