Our military community might only comprise less than one percent of the national population, but there are more Gold Star families than you might think. Since 9/11, more than 16,000 servicemembers have died in non-combat related circumstances and over 7,000 in Iraq and Afghanistan. To honor all of the servicemembers who have died in combat, here is the history of the Gold Star and its significance in our community. 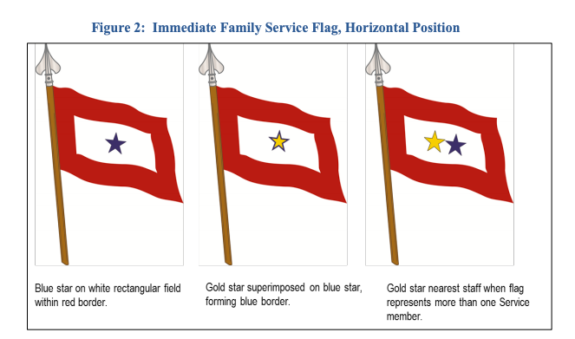 The banner was designed in 1917 by an Army Captain in honor of his sons who were serving in WWI. In 1918, the Women’s Committee of the Council of National Defenses suggested to President Wilson that mothers who lost a child in war should wear a black armband with a gold gilt star. Wilson agreed to the suggestion, and the approval led to the gold star covering blue stars on service flags.

In 1928, Grace Darling, a Gold Star mother, founded the American Gold Star Mothers group along with 25 other grieving mothers. Gold Star Mothers are devoted to keeping the memory of deceased servicemembers alive by working within the military community.

The Congressional Act 36 U.S.C 179-182 of 1967 authorized that immediate family of servicemembers can fly Service Flags.

GS families receive survivor benefits. The death gratuity program allows a one-time tax-free payment of $100,000 to eligible survivors of servicemembers. This payment aims to assist families with immediate expenses. Since families will no longer be receiving income payments from the DoD, monthly payouts are also available.

There are other payments families are eligible to receive. The VA is responsible for paying Dependency and Indemnity Compensation (DIC). DIC is a tax-free benefit paid to eligible survivors. The DoD also pays out a Survivor Benefit Plan (SBP). SBP is a lifetime annuity based on a percentage of pay, adjusted for inflation. SBP is paid to eligible beneficiaries.

In late 2019, the National Defense Authorization Act (NDAA) repealed the “Widow’s Tax.” Prior to this legislation being signed, military survivors whose sponsors died from service-connected causes had to forfeit part or all of their purchased military survivor benefits when they received DIC from the VA. These separate benefits offset one another, so every dollar a survivor received from SBP was a dollar not received by the DIC plan.

In 1972, the creation of the SBP allowed a military retiree or retirement-eligible service member to provide a continuous lifetime annuity for their spouse and dependents. The VA’s DIC benefit offsets the money a widow might receive from SBP. This offset is often referred to as the “Widow’s Tax.” Both SBP and DIC are paid for by different federal agencies. The signing of the NDAA eliminates the “Widow’s Tax,” with one-third of the SBP to be restored in early 20201, two thirds in 2022, and the final third in 2023. At this point, surviving spouses will receive their SBP and DIC payments in full.

This unfair offset was eliminated in part thanks to a grassroots surviving spouses’ organization and the support of senators.

Prior to the NDAA being signed, surviving spouses were often strongly encouraged to sign survivor benefits to their children to receive both SBP and DIC. A change in the 2016 tax law increased the tax rate for those benefits exponentially. The repeal of the “kiddie tax” means that both survivors and dependents will now be able to receive the full benefits they deserve.

The “Widow’s Tax” financially affected over 65,000 military surviving spouses. Survivors who received a partial refund of their spouse’s premiums aren’t required to return the money to the DoD. Eligible survivors will start receiving the SBP payments in full without offset beginning with the January 2023 entitlement payment. A current list of FAQs can be found here.

Charitable organizations have been established for Gold Star mothers, Gold Star spouses and other members of Gold Star families.

Gold Star Wives of America – Preserves and enhances benefits to surviving military spouses and children. GSW helps members and children plan for the future and advocates for accurate and reliable legislation for Gold Star spouses and families.

TAPS – Tragedy Assistance Program for Survivors has offered compassionate care to those grieving the loss of a loved one. TAPS is a free service to surviving families.

Society of Military Widows – Founded in 1968 to serve the interests of women whose husbands died on active military duty.

The Travis Manion Foundation – Seeks to empower veterans and families of fallen heroes to develop character in future generations through mentorship and character development programming.

While the Gold Star distinction is an honor that no surviving spouse or family member wants to experience, it is a distinction that deserves recognition and respect. That is why legislation to help them is still ongoing with some seeking to extend their access to military installation services, like the Commissary and Exchange.