The IRS recently announced that over 130,000 disabled veterans are due refunds from the IRS due to a “computer glitch” which caused the IRS to incorrectly withhold taxes on disability severance payments to combat-injured veterans.These payments should be non-taxable payments, just like ...

The IRS recently announced that over 130,000 disabled veterans are due refunds from the IRS due to a “computer glitch” which caused the IRS to incorrectly withhold taxes on disability severance payments to combat-injured veterans. These payments should be non-taxable payments, just like disability compensation from the VA.

This error occurred between 1991 and 2016, until the problem was formally identified and addressed. The result was the passing of the Combat-Injured Veterans Tax Fairness Act of 2016. It has taken the DoD close to two years to help identify impacted veterans and coordinate with the IRS to inform affected veterans. 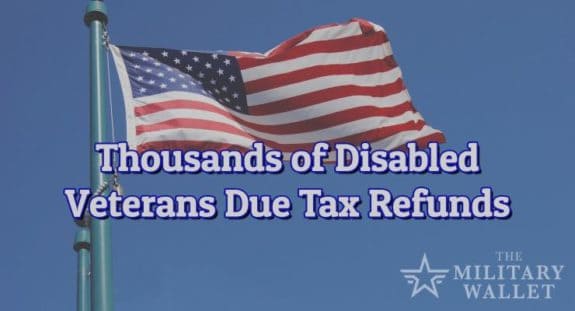 The IRS is in the process of sending letters to affected veterans and their family members and survivors informing them of the error and their eligibility for a tax refund using the Combat-Injured Veterans Tax Fairness Act Claim.

The IRS believes many veterans will be eligible for refunds of $1,750 or more, depending on their specific circumstances. The National Veterans Legal Service Program (NVLSP) estimates that some veterans may be due refunds exceeding $10,000.

This article explains the situation and describes how to submit a Combat-Injured Veterans Tax Fairness Act Claim by filing an amended tax return to claim the amount of money incorrectly withheld from the veteran’s severance payments.

Thousands of military members are either voluntarily or involuntarily separated from the military each year. Many of these veterans are eligible to receive separation pay, which is normally taxed at the 20% – 25% range.

However, veterans who are separated due to a combat-related injury or illness should not have to pay taxes on their separation pay. From 1991 to 2016, the IRS computer system failed to classify certain veterans as having tax-exempt separation pay at the time they were separated from the military.

These veterans had taxes incorrectly withheld from their separation pay and are due refunds from the IRS. Members will need to file an amended tax return.

How to Determine if You Are Eligible for a Tax Refund

Affected veterans include those who received a disability discharge between January 1991 and December 31, 2016, and also received disability separation pay. This would also apply to surviving family members of these veterans, if the vetean has since passed away.

The IRS is sending out notification letters to veterans informing them of their eligibility to file a Combat-Injured Veterans Tax Fairness Act Claim. However, the letters do not state the amount of money that was erroneously withheld. The IRS began sending these letters on July 9, 2018, and will continue sending them through July 20, 2018.

What if the veteran has passed away?

Surviving family members or a court appointed trustee can file a claim. Surviving spouses can file the claim using the amended tax return, Form 1040X. A court-appointed trustee will need to use IRS Form 1310 (Statement of Person Claiming a Refund Due to a Deceased Taxpayer).

How to File an Amended Tax Return

The IRS press release states that affected veterans “should file Form 1040X, Amended U.S. Individual Income Tax Return, to claim a credit or refund of the overpayment attributable to the disability severance payment.”

There are two ways to file a claim:

The default method, or by calculating the amount that was incorrectly wittheld.

The Default Method: This is the easiest way to file the claim, as the IRS has prequalified you as being eligible. All you need to do is fill out the form and submit your claim.

The default refund amount is based on when you were separated:

Calculating the incorrect amount withheld: This takes more work on your end, and requires you to dig through your finance records and past tax returns (if you still have them).

How do I obtain copies of part tax returns?

You may be better off requesting the default refund if neither you or the IRS have copies of your tax returns.

You can learn more about how to file an amended tax return in this article.

Where to Send Your Disability Separation Claim:

Where to Get Help

You can contact your local IRS Taxpayer Advocate’s office, a tax professional, or a Veterans Service Organization.