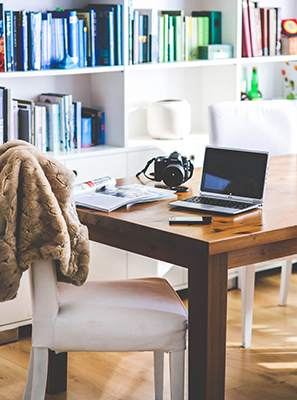 With all the interconnected, smarter-than-smart home features available today, it makes sense that our home entertainment systems have evolved by leaps and bounds, too. And that's great news whether you're into movies and music, or you've just had it with losing your TV remote. To get the lowdown on your options, check out this fourth installment of The Connected Home—a series of articles highlighting just how high-tech your humble abode can be, from your thermostat to your home security system and beyond. Below, we show you how to boost the IQ of your entertainment system so it's easy to operate and looks—and sounds—more amazing than ever.

If you want the most convenient TV- or movie-viewing experience, you’ll want to buy a smart TV. Let's be more emphatic: You need to buy a smart TV. So  what's the main difference between a standard TV and a smart TV? "Smart TVs enable you to directly stream programs from the Internet,” says David Katzmaier, home theater expert at CNET.com.

Smart TVs allow other web-based integrations, too. Internet streaming opens up a broader selection than traditional cable services; plus a smart TV can remember what you've watched and suggest new shows based on your tastes. For example, if you've binge-watched your way to the bitter end of "Breaking Bad," a smart TV will know you'll also love "Better Call Saul" and suggest you try that next.

While there are different types of smart TVs, one leader in the field is Roku TV (like the 43-inch TCL 43FP110 for $399 on Amazon), which builds the streaming power of the Roku box right into the TV.

“Roku's user interface makes streaming video and using its thousands of apps easy,” Katzmaier says. Another bonus: The interface is frequently updated to be more user-friendly. For instance, one cool feature rolled out last year enables users to pause live over-the-air TV, much like a DVR.

For a more theater-style experience, you can also get a smart projector like the FAVI pico+ ($399.99 on Amazon), which can give you an image as large as 120 inches. But even better is the portable minicomputer that can run Netflix, Skype, the Google Chrome browser, and thousands of other apps to make them larger than life.

While your Amazon Echo or Google Home smart speakers are great for telling you the weather and other helpful tidbits, if you love superb sound quality while listening to music or hosting fully immersive movie nights, you'll want to expand beyond your trusty virtual assistant and get a smart sound system, too.

While there are tons of cool speakers on the market, the key to making your speakers “smart” is to go wireless.

So without a wire connected to your music player, how do smart speakers know what to play? There are two ways this works: The first and more basic setup has the speakers rigged with Bluetooth—allowing the speakers to "pair" directly with your music player through radio waves. An even smarter setup is having Wi-Fi speakers, which are also paired through radio waves. However, Wi-Fi waves are much stronger, transmitting about 11 megabits per second compared with Bluetooth's measly 0.8.

Confused? Bluetooth is a short-range wireless speaker solution, pairing one device with another. Wi-Fi has greater range and can work with multiple devices.

“Wi-Fi generally gives you better sound quality than Bluetooth-connected speakers,” says Katzmaier. "There are always exceptions and Bluetooth can sound very good, but in general Wi-Fi can sound better because it has higher bandwidth and has to apply less compression."

Another big difference is that Bluetooth allows phone calls to come in over the speaker, thus interrupting the music and potentially mortifying you, depending on the call. With Wi-Fi streaming, the music will continue playing.

Prices for Wi-Fi-enabled speakers range considerably, but one leader in the field is Sonos ($200 and up on Amazon), which can sync up with Amazon Echo or Google Home.

If you’re looking for a cheaper, on-the-go option, there's the Chromecast Audio ($35), a Peppermint Pattie-size device that plugs into any speaker with an auxiliary port and turns it into a Wi-Fi-enabled wireless speaker. Basically the device picks up the Wi-Fi radio waves coming from your music player, allowing you to stream your favorite tunes, no cable required.

Whichever option you choose, just make sure the device supports your favorite music and audio apps. Most products are compatible with Pandora and Spotify, but double-check first before making your purchase.

It’s time to ditch your basic TV clicker (or clickers most likely!) for a universal smart remote. Fortunately, you won't have far to look.

“The ultimate smart remote is your smartphone,” says Katzmaier.

Turning your smartphone into a universal remote to control your music, TV, and more is surprisingly simple, provided your phone has an IR blaster. That's the same infrared technology that your old TV remote uses to communicate with your TV. Smartphones as far back as 2013 have blasters, which look like a tiny, circular unlit LED on the top edge of your phone. If you have one, you can download any number of free mobile apps such as AnyMote Universal Remote +WiFi, which allows you to control over 9,000 devices, including your TV, DVD, AC, and anything else in your phone that operates through an LED remote.

If you want to eliminate the need for a remote entirely, you can do so with EyeSight Technologies’ SingleCue gesture-based smart controller ($149), which uses infrared sensors to read your body language: An open or closed palm plays or pauses movies or music, a pinched finger sliding left and right boosts or lowers the volume, and so on. Who needs to watch "Minority Report" when you can live it instead?