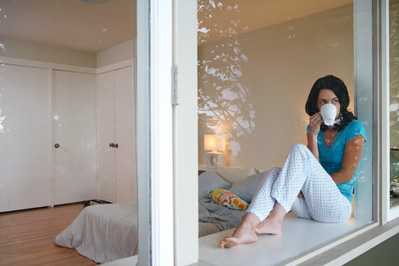 When a landlord jacks up the rent, tenants are usually stuck between two costly and indisputably crappy options: Pay the higher rent, or move out (which requires coughing up more money for movers, of course). But now, in Portland, OR, there’s a third option that’s causing quite a stir: Move out and demand your landlord foot the bill! Is that divine justice or what?

More to the point: Will this catch on in other cities across the U.S.?

This new law, passed by the Portland City Council last week, aims to address Portland’s housing emergency, which has been in effect since October to call attention to a frightening fact: 1,800 Portlanders are now living on the streets, unable to find affordable housing.

City Commissioner Chloe Eudaly (who championed the bill and is a renter herself), tried to pass a rent freeze, but that got shot down. So she turned to what she called “the next best thing: relocation assistance.”

Here’s how it works, according to local news site OPB: If a landlord raises the rent by more than 10%—and if that raise forces a tenant to move—he’ll have to pay the tenant anywhere from $2,900 to $4,500 in moving fees, depending on the size of the original lease. That amount is designed to cover not only average moving costs, but also first and last months’ rent and a security deposit. Not a bad consolation prize for needing to pack up and move!

Aside from Portland, Los Angeles is the only other major metro area currently with some form of “relocation assistance” in place to protect tenants. As for Portland’s plan, the ordinance is, so far, not permanent: It’s set to expire once its “housing emergency” is declared over (predicted to be in October).

But then again, who knows? Portland’s housing crisis could also get worse, and allow relocation assistance to linger—and perhaps catch on elsewhere.

“This notion could spread, especially to more progressive cities,” says Michael Vraa, a tenant advocacy attorney at Home Line in Minneapolis. And in his opinion, it’s long overdue in places without rent control or stabilization, which caps how much landlords can raise monthly fees.

“The vast majority of cities and states do not have rent control, and there is no legal limit on how much landlords can raise rent,” he says. “In other words, one year your rent could be $2,000 … the next, $3,000.”

Do landlords deserve it?

While Portland tenants may be sighing in relief, Portland building owners are on a warpath. Attorneys at Multifamily Northwest, which represents landlords in the Portland area, have threatened to sue the city council, claiming this law would bankrupt small landlords who merely keep up with the rising costs of maintaining their properties.

“What if heating costs rise? What if the property needed a new roof? What if property insurance has risen? Does the landlord eat these costs or is it only fair that the cost is shared?” asks Denise Supplee, a Realtor®, real estate investor, and co-founder of SparkRental. “It makes me mad that too often the landlord is vilified, when they are ordinary folks trying to make a living. I have seen my share of ridiculously tenant-friendly laws that can quickly put a landlord out of business, however this Portland one tops the list.”

And while tenants may see this ordinance as a victory, Nathan Miller, a landlord and founder of Rentec Direct, argues that it could also backfire.

“The actual consequence of this law could actually hurt tenants more than help them as intended,” says Miller. “Rents will go up higher than ever because landlords will now do routine 9.9% raises every year versus the traditional practice of increases every three to four years.”

Regardless of where they live, renters do have options if their landlord tries to raise the rent that don’t involve just paying up or moving out.

“Negotiation can work out sometimes,” says Vraa. “In general, landlords don’t want to chase the current tenant out. So tenants can sometimes bargain for lower rents, perhaps in exchange for something like agreeing to a longer term lease—two years instead of one, for instance.”

In other words, don’t assume your landlord is just dying to bleed you dry. Try to reason with him first and you may find, for instance, that he’s trying to make ends meet just like you.