How to Get Rid of Pantry Moths: Kitchen Pest Control Made Easy 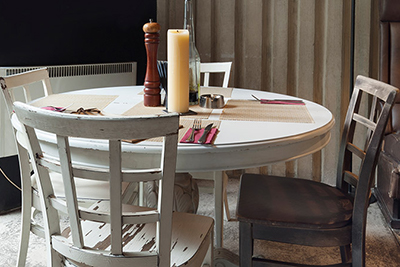 There’s no better appetite suppressant than a kitchen full of pantry moths. Also known as Indian mealmoths, these little critters—both the brown moths and their larvae—can easily sneak in through an infested box of cereal.

So what can you do to kick them out, pronto? Check out these steps for getting rid of pantry moths and keeping them from flitting back in.

For starters, don’t beat yourself up: Pantry moths aren’t a sign that you’ve gotten lax on housecleaning.

“They’re most often brought in by some kind of food product that they eat,” explains Ron Harrison, an entomologist for pest control service Orkin.

Pantry moth larvae particularly like munching on birdseed, flour, cereal, and other grains, but they’ve also been found on more exotic snacks like dried fruit and chocolate. If you live in an apartment or other close quarters, it’s also possible that they found their way in from a neighbor’s shelf.

Step No. 2: Read the fine print on ‘moth traps’

Plenty of products you buy at home supply or hardware stores promise to eradicate pantry moths without toxic chemicals. Before you try one, read the ingredients carefully. Some use pheromones (chemical attractants) “which have no impact on the worms,,” Harrison says. And if the pheromones attract only male moths, that won’t help you either, because it’s the female moths which breed like crazy.

In short, these moth traps “will tell you that you have a problem, but aren’t very good at controlling it,” Harrison says. To find one that is actually helpful, look for a product that offers “mate disrupting pheromone.” This confuses the male moths so they don’t mate at all.

Step No. 3: Find the source

To get rid of pantry moths, you’ll have to find the food that brought them into your house and throw it out, ASAP.  Time is of the essence, because the larvae can chew through cardboard and quickly infiltrate other boxes. So pour some of each box out and see if anything moves (gross, but that’s the drill). The larvae are small (two-thirds of an inch long at their largest) and white and have black or brown heads.

When in doubt, consider throwing out anything in a cardboard or paper container, says Leslie Reichert, the author of “The Joy of Green Cleaning.” Or, if there’s anything you prefer to keep, put it in the freezer. “This will kill the larvae should there be any you missed,” Reichert says. (Of course, then you could end up eating them, but at least they won’t proliferate.)

Simply taking everything off your kitchen shelves and scrubbing isn’t enough.

“All shelves need to be washed with white vinegar, and the pantry walls should be washed as well,” Reichert advises. Pay particular attention to small cracks in the walls or corners containing cocoons or webbing.

Once you’ve cleaned everything and placed your food back in, Harrison recommends storing things in sealed containers. “It’s a pain,” he acknowledges, “but that will ensure you’ve gotten rid of the moths for good.”

If you try everything on this list and still feel like your pantry is overrun, it’s not necessarily time to declare defeat. But you may want to think about calling in a pest control service. Go to Pestcontroldirectory.com to find an exterminator near you.